A belated Happy New Year from all of us Magnards! We hope you have had a good start to the year so far. We have certainly been busy already and 2017 is promising to be very exciting!

Is there a better way to start the year but with an international debut?! We don't think so. We were invited by Lucerne Symphony Orchestra to perform as part of their lunchtime concert series. None of us had been to Lucerne before and we were going to perform on the main concert hall stage at KKL Luzern, so you can imagine our excitement! We thoroughly enjoyed performing to one of the warmest and smiliest audiences ever, and loved every minute of our visit. We even managed to fit in a bit of exercise... Thank you so much LSO!

The other thing that has been keeping us occupied is our long-awaited Revolting Rhymes and Marvellous Music CD, which is scheduled to be released June this year! As you know we made the recording in April last year with lovely Andrew Keener (producer) and Oscar Torres (engineer), and it has been a rather complicated process, which involved lots of fundraising. We are so grateful to all the amazing people who have helped us so far - people of Thame in Oxfordshire, where our flautist Suzie comes from, and of our horn player Jon's home town, Laughton in East Sussex, among many others! We are currently waiting on Orchid Classics to send us final designs of how the CD will look, and once that's confirmed - it's all go!!

We are now preparing ourselves for two events in February - we will be performing at the magnificent Ripon Cathedral on Monday the 13th, and returning to the Royal Opera House to give a workshop related to the ballet Sleeping Beauty on Sunday the 18th. We are really looking forward to the concert at Ripon Cathedral, as we are doing something a little different in terms of the programme - we wanted to make the most of the grand atmosphere of a cathedral, so we have chosen music from Bach, Mozart and Barber that we think is going to sound stunning in the acoustic, and interspersing them with unaccompanied solo works performed by each of us. Please do come if you are around! 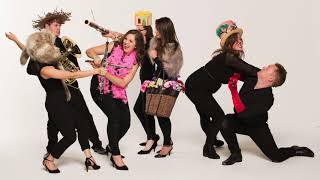